Darius and Humphrey are two friends who go looking for the real Australia, a journey that takes them to Australia’s north-west, Canada’s ski hills, London’s damp streets and Munich’s bars.

Along the way, they learn about themselves, about their country and about what the world thinks of Australians. Ambitiously and misguidedly, they set about changing the stereotype, by opening an Aussie bar in Munich that tells the real history of Australia. It’s out with the inflatable crocodiles and in with information about stolen Aboriginal children; out with Paul Hogan and in with Pauline Hanson. No other work of fiction tackles the topic of Australian identity, history and society quite like True Blue Tucker. What does it mean to be Australian? Read this book to find out.

Campbell Jefferys is from a small town in Western Australia. His second book, Hunter, won the fiction category of the 2009 Next Generation Indie Book Awards. He is also the author of The Bicycle Teacher and True Blue Tucker, which won in the Australia/New Zealand fiction category of the 2012 Independent Publisher Book Awards, and the non-fiction travel collection Greetings from.
Other titles by this author: 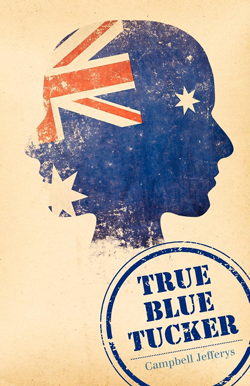